Riviera looks back over the year 2020 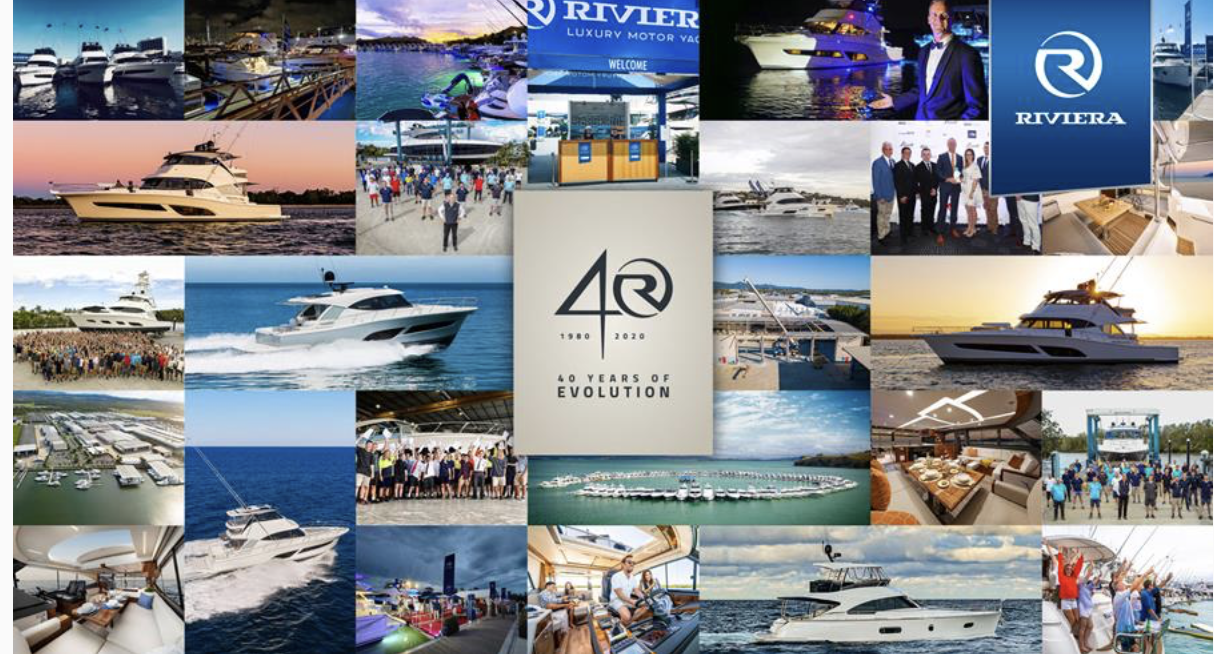 It was a year of achievements in 2020 for the Riviera team as the company marked 40 years of boatbuilding evolution.

While the challenges were evident throughout the year, global demand for Riviera accelerated from June as the company received forward orders that were the best in 40 years.

This represented a milestone achievement for Riviera, an exceptional performance for Australia’s largest luxury boatbuilder that showcased the enduring popularity of Riviera’s range of motor yachts from 39 to 72 feet, praised the world over for their sea-keeping qualities, advanced engineering and luxurious interior finishes.

Riviera owner Rodney Longhurst paid tribute to the company’s team for their drive and dedication throughout the year.

“I would like to heartily congratulate our team for the achievements of our skilled boatbuilders, engineers and designers, sales, marketing and administration teams providing strong support to our dealer representatives across Australia, New Zealand, the Americas, Europe and Asia,” said Mr Longhurst.

“With safety protocols in place since March, we were fortunate to be able to continue building motor yachts for delivery to new owners around the world and continue to support our owners.

“Our team’s focus is to create the best boating experience possible, and it’s gratifying to hear so many Riviera motor yacht owners who credit the Rivieras of today as the best we’ve ever created.”

Record start to the year

The year began with the Riviera family in New Zealand setting a new record for the largest Riviera raft-up ever staged. One hundred and six Riviera motor yachts gathered on Awaawaroa Bay on the southern side of Waiheke Island to create a massive circle measuring 234m in diameter. The mammoth gathering beat the previous record of 48 Riviera motor yachts set in Western Australia in 2017.

There may have been limited scope for social events during the remainder of the year, but the Riviera family made the most of opportunities as they arose while still adhering to the advice of health and maritime authorities.

The Port Lincoln Tuna Classic, held off the Eyre Peninsula in South Australia, led the way in March celebrating 14 years of this exciting catch-and-release fishing event enjoyed by many Riviera motor yacht owners.

This was followed by the annual Port Lincoln Experience hosted by R Marine SA, where 120 friends and family aboard 33 Riviera motor yachts were joined by Riviera owner Rodney Longhurst to enjoy a sumptuous long weekend.
Our biggest intake of apprentices

Riviera welcomed 33 new apprentices in 2020, growing this talented group of future master boatbuilders to more than 80.

Almost 30 years since introducing its apprenticeship program, more than 300 Riviera apprentices have become qualified tradespeople and are now working across industry sectors around the world.

The 505 SUV premiered at the Miami Yacht Show in February. The sporty and adventurous yacht boasts a three-stateroom/two-bathroom layout with full-beam master stateroom, along with a superb raised and fully covered alfresco deck that redefines luxury and privacy for the popular SUV collection.

The premiere of the 64 Sports Motor Yacht followed in June. The 64 was completed during the height of the COVID-19 restrictions, a testament to the dedication of the Riviera team.
The 64 features four staterooms including a full-beam master, plus a large utility room or optional crew cabin, three bathrooms, a large covered alfresco deck, sporting cockpit, a superbly appointed and expansive four-sided enclosed flybridge, and a versatile foredeck with plenty of room to either relax and entertain in comfort or to accommodate a large tender.

In August, the 64 SMY embarked on a world tour that included the east coast of Australia, New Zealand and then the United States where she made her world boat show premiere at Fort Lauderdale.

The 50 SMY stands proudly alongside her sisterships, the 72, 68 and 64 Sports Motor Yachts, a new collection of yachts that are in a league of their own. Riviera has created a spacious motor yacht with extensive water sports capabilities and a design for extended coastal passages or weekend escapes offering a three-stateroom, two-bathroom layout. She can easily serve as a luxurious family, entertainer or adventure yacht.

The latest expression of Riviera’s flagship 72 Sports Motor Yacht had her world premiere at the Fort Lauderdale International Boat Show in October.

The newest 72 Sports Motor Yacht introduces a suite of refinements that heighten her voyaging capabilities and owner enjoyment. The 72 SMY offers greater range and speed, and the benefits of enhanced guest and crew accommodation consisting of four staterooms, three bathrooms and a utility room for additional accommodation or storage.

These are complemented by a large alfresco deck, foredeck entertainment zone and flybridge ‘sky lounge’ with separate deck.

The next generation of the popular Belize 54 Daybridge also premiered at Fort Lauderdale in October. The latest refinements offered in this European-inspired motor yacht include an impressive new flybridge and hardtop design, greater speed and enhanced owner comforts consisting of a new helm design, greater seating and useable deck space, as well as refinements to the laundry and galley.

Milestones for the 5400 and 6000 Sport Yacht Platinum Edition

Riviera’s constant refinement led to the release in 2019 of the 6000, 5400 and 4800 Platinum Edition series which added a new level of elegance and luxury for the Sport Yacht range.

In calendar year 2020, Riviera has welcomed 92 new owners to the company’s exclusive global family. To meet this popularity, the company embarked on the first stage of a $10 million expansion of its Gold Coast factory by extending the existing facility, preparing for construction of new buildings, and the implementation of new technology and equipment.

Riviera was named Exporter of the Year for 2020 in the annual Australian International Marine Export Group (AIMEX) awards held on the Gold Coast in November. The award recognises the global popularity of Riviera’s world-class motor yachts.

More than half of the motor yachts built by Riviera each year are exported from Australia to the Americas, Europe, Asia and New Zealand.

Planning for a strong future

Riviera is currently developing further new model releases that will herald a new era of motor yacht design for the company.

“After 40 years and launching more than 5,650 motor yachts, the Rivieras of today are the best yachts we have ever created, and this inspires our team to build different and better yachts every day,” said Mr Longhurst.

“The plans we are implementing now are preparing Riviera for an even stronger future.

“Through the dedication of our team of over 600 exceptional craftsmen and women, our motor yachts today offer superior design, technology, performance and comfort that allows us to equally compete with the best in the world.

“After 40 years of evolution, we continue refining and advancing our craft. We are looking forward to the year ahead with the cautious optimism of our times, and grateful for the achievements of this past year.”

WHY CHOOSE US TO SELL YOUR BOAT

Where customer service counts and our in-house boat service team mean our customers are assured the ultimate boat ownership experience.

EXPERIENCE YOU CAN COUNT ON

Making sure the first time you get out on the water in your new Riviera all the systems are installed to your specifications, and the boat is completely sea tested.

Service, storage, parts and accessories, advice, and information, we intend to do everything we can to enhance your boat ownership experience and lifestyle.

Our marine engineers are committed to supplying and creating high-quality, customised solutions for your boating lifestyle. 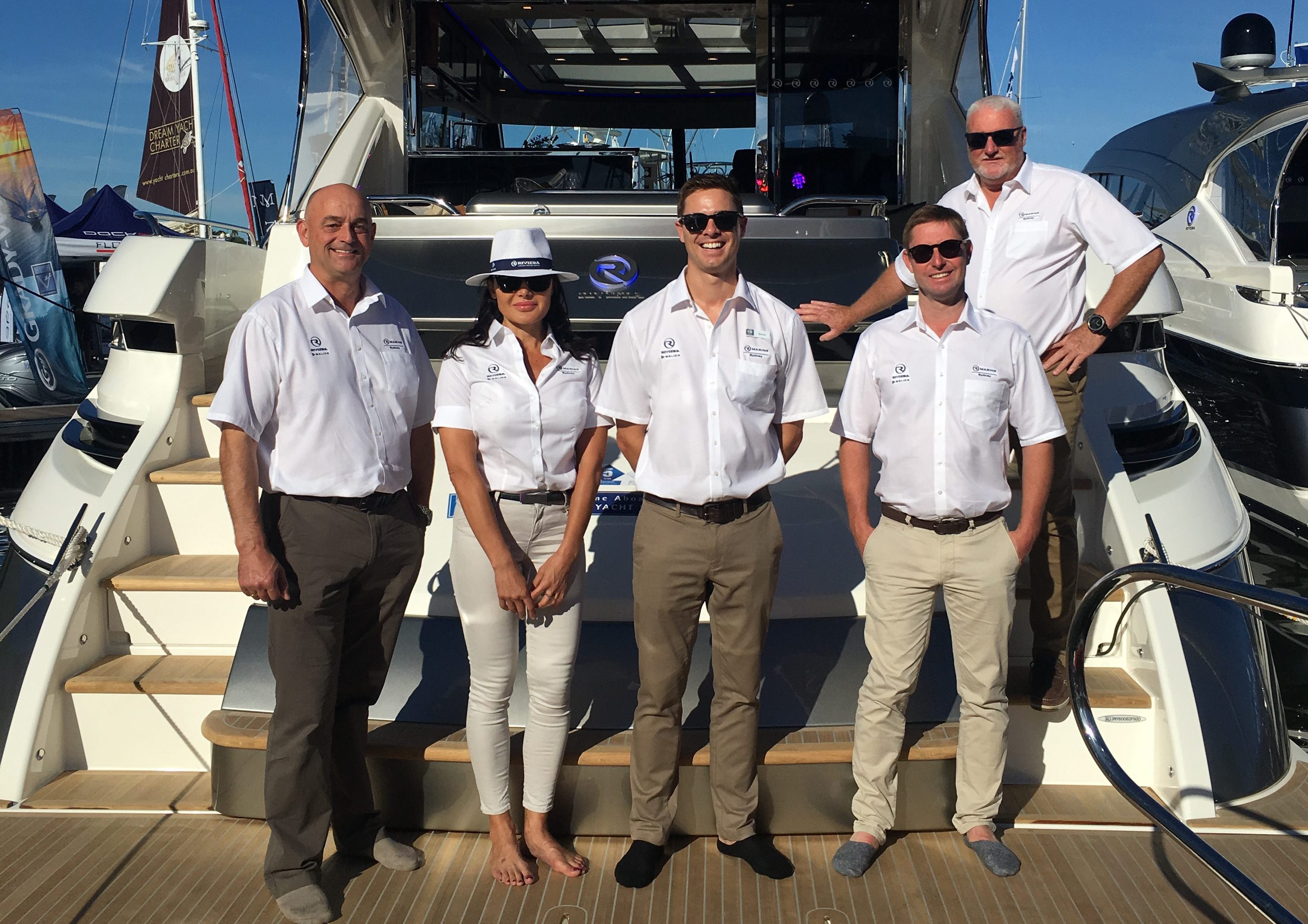 Speak to our Team of R Marine Experts

“From the point of view of your dealership I was astounded by the professionalism shown and wonder as to what level of service could be expected when purchasing a million dollar boat if the service we received when purchasing a second hand vessel was so fabulous. This is our fourth Riviera and along with three other cruisers we have dealt with a number of brokers from the good to the very stupid and I can attest that Riviera Sales, Rushcutters Bay are so far in front of the rest, it is remarkable. The attention to detail both small and large was incredible, the boat being presented clean and ready to go, the beautiful engraved plaque in our name and the ‘nothing is too much trouble’ attitude are attributes rarely found in today’s market place.”

“...an amazing experience. Thanks so much for helping us make this happen - I am so proud to be finally part of the Riv community.”

“Eva and I would like to convey our sincere appreciation to all at Riviera Sales Rushcutters Bay, who very professionally and caringly assisted us through the total sales process with our purchase of ‘Plan-B’.
As you are aware we are being assisted by Riviera Sales in rectifying a few minor problems which recently became evident and unlike some other sales companies that adopt an attitude of “we’ve got your money see you later” Riviera after sales service and caring attitude is very impressive to the point where we are not only encouraged to come back to Riviera Sales but also to inform our many friends of our good experience.”

“Firstly, I have been so seriously impressed with all of my dealings with your organisation. All matters have been handled with the utmost professionalism and courtesy. Nothing is a problem and a client, like me, gets the very clear feeling that you can always rely on solid ‘after sales service’. You have it down right and it is very refreshing.”

“Clare and I would also like to take this opportunity to extend our thanks for all your excellent help and service. We have had more than our fair share of dealings with boat brokers so we are more than qualified to judge you are an exception to the rule!
Everyone in your organization was helpful. It was most unfortunate that the first boat fell through but it turned out for the best and we appreciated [the salesman's] integrity and obvious concern in difficult circumstances. His attention to detail was exemplary and our boat was handed over to us in immaculate condition and he spent a very long time arranging everything and explaining it all to us personally.”

“We cannot speak highly enough of the whole Riviera experience, from the day we walked in the door to actually receiving the boat. It’s rare in this day and age to go through a whole experience without finding something to fault, however our experience with you achieved this.”

“First of all I would like to thank you for the respect you showed me and your professionalism. You went out of your way arranging numerous details for me regarding the Riviera 38; picking me up from my hotel, arranging the boat lift and sea trial and even organizing a day at the Sydney Boat Show. [Thank you for] recommending Sam Wood a skipper, to bring my boat from Sydney NSW to Buddina Qld. The boat arrived in pristine condition.

I would highly recommend anyone looking to buy or sell a Riviera to contact you direct.

Once again thank you.”

“I felt I was treated with the utmost courtesy and professionalism at all stages and it was and still is a pleasure to deal with you and your team.”

“We really appreciate the ‘extra mile’ that all at Riviera have taken to get us a replacement boat so quickly- particularly at this busy Christmas period.
As previous Riviera owners we appreciated your build quality and continuous design improvements and wish to make special mention of the team at Rushcutters Bay who are very professional sales consultants-very helpful and knowledgeable without being ‘pushy’; it is a pleasure doing business with them.”

Happy Mother’s Day to all the wonderful women ou

Riviera 575 SUV One of the astonishingly versatil 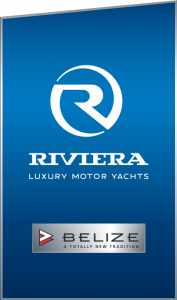